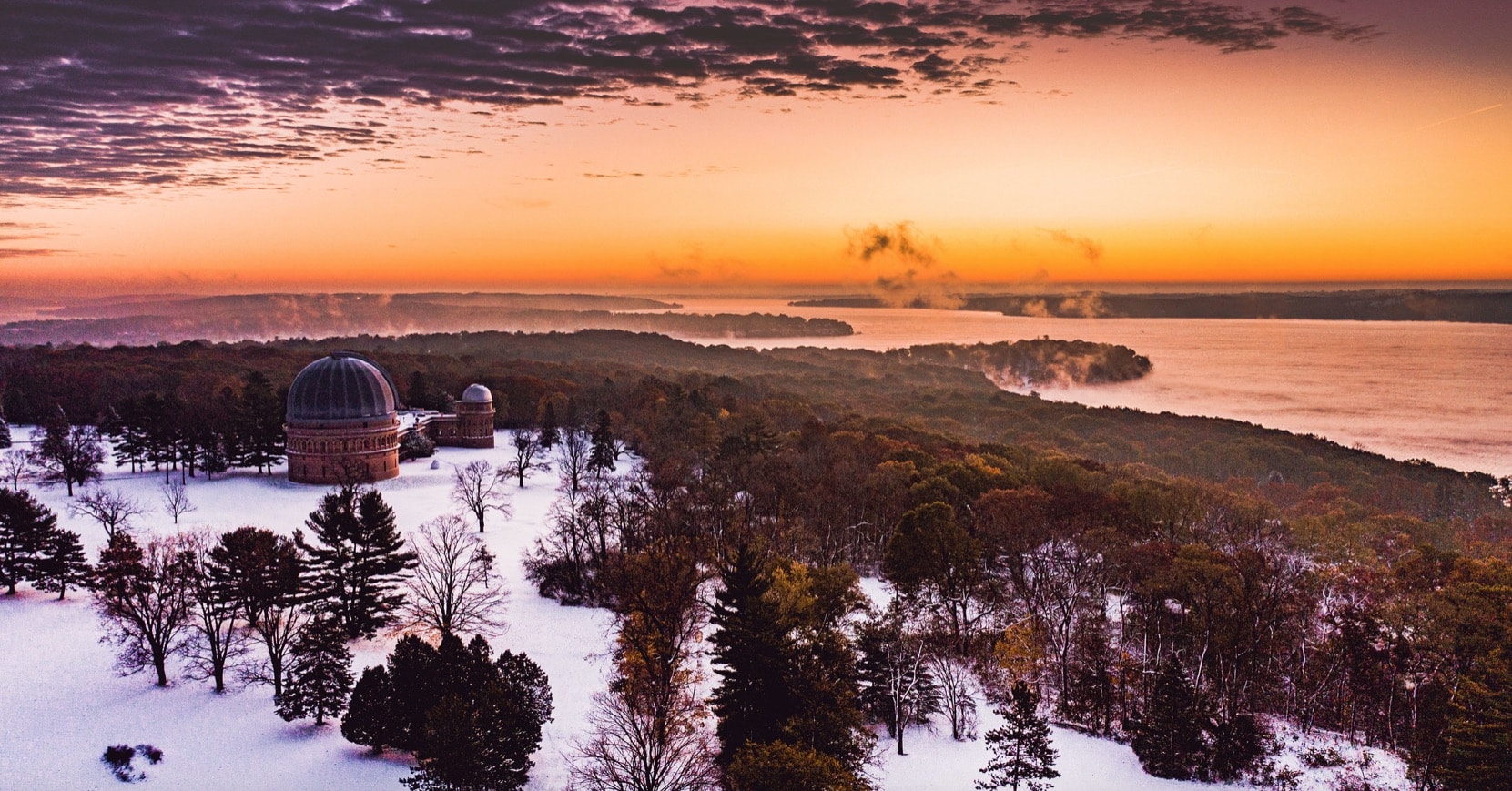 I write that title with a question mark because it deserves one. The community, it seems, would have preferred I place a period there. As in, that’s what it is. A development. It cannot be disputed, and if you dispute it then you’re a developer, or a lover of development. I, as I believe you know, am not such a person. In fact, I hate development. I think development is ruining rural and small town America. Development is not good. It isn’t necessary. In fact, it’s often terrible. In cities, it’s inevitable, but in small town America? It’s usually a nuisance and should be avoided.

That’s my take on development, and that was my position in 2005/6 when a large hotel developer out of New York attempted to turn the Yerkes Observatory campus and lakefront into a massive hotel spa, complete with ridiculous condominiums and housing surrounding the Observatory itself. What a terrible idea that was then, and what a terrible idea it would be now. That was a development. The community at the time greatly preferred the other option for the land, which was a competing bid lobbed in by George Williams College (Aurora University). That bid was for far less money, and was subject to the re-zone and subsequent sales of at least two lakefront parcels out of the 550′ of lakefront that the University of Chicago has owned for the past 100 years, give or take a decade or two. The community wanted that deal. They hated the idea of a Mirbeau hotel, and rightly so. The deal they wanted so badly was to turn this lakefront into a couple of residential lakefront lots, thereby sparing it from development.

In early 2018, the University of Chicago announced its intentions to cease operations at the Observatory, and they formally requested proposals for the highest and best use of the property. At that time, I contacted the University and pitched my idea. The idea? Sell off the external tax keys that the University had long owned (mostly for employee housing), donate the Observatory and core grounds to some non-profit that would run the property in perpetuity, and monetize the lakefront by selling off three large lakefront lots. This idea, after all, was essentially what the community wanted in 2005/6. The University gets to capture some small reward for their 100 years of ownership, and the community wins because the Observatory is saved. The idea made complete sense, and as someone who values this community and lakefront more than most, I found it to be the perfect solution to what had been the Yerkes Problem.

The University shared my desire to save the Observatory, as they had both a keen understanding of the importance of this property to this community and a desire to avoid a repeat of the Mirbeau fiasco. We began the work of saving the Observatory (YFF was formed to receive the donation) and slowly sold off those ancillary tax keys to residential users (I have been representing the University in these sales). The fruits of this effort have already been realized as two of the initial sales were of the long-neglected properties on Geneva Street, the same two properties that have now been beautifully renovated and improved. Not only does that return two properties to the Williams Bay tax rolls, but it beautifies the gateway to our lakeside community. What’s left now is the component of this deal that allowed the University to donate the Observatory: the lakefront.

There is much concern and confusion over this lakefront piece. I’ve patiently watched the local newspapers write articles about the “development”, and read the comments from the community wherein they espouse their claim to this piece of “public” land. I’ve avoided public comment on this until very recently, and I felt compelled to write today on the topic because, in part, I feel the Village, and the community, has lost sight of the big picture. For a community that butters its ample supply of bread on the backs of the lakefront tax payers, there sure is a lot of misplaced animosity here. The piece of lakefront in question has indeed been left untouched over the years, a condition that is solely due to the University of Chicago’s dedication to Yerkes Observatory. Imagine, if you will, that the University grew tired of this lakefront in the 1930s. If that had happened, do you know what would be on this currently over-grown parcel? Likely something similar to high density Cedar Point Park. Or had it been developed in the 1980s, you might find the lakefront filled with a dozen cottages, each with their own pier and their own 45′ of lakefront (think Dartmouth Woods). Had it been sold in the 1970s, it might have two brick towers on it, with 60 boat slips (think Bay Colony). Instead, the University has held tight to this lakefront, saving it from all sorts of terrible outcomes. Today they are seeking to divide 550′ of lakefront into three large estate parcels. Their reward for this dedication to open spaces and conservation? Relative hostility from the Village Board and hostility from some in our community.

There is a general consensus that this parcel should be left in its current state, under its P&I Zoning (Public and Institution). What is not understood is that this zoning does not save this parcel from anything. This zoning is treated as though it’s some sort of conservation zoning, and that if the Village only thwarts the effort to turn this into three single family homesites, then everything will be okay. Status quo bias dictates such a flawed belief. Let’s now consider this parcel and its current zoning. After all, if you’re going to deny single family zoning, then you’re going to be forced to contend with the current zoning. Let’s start with a few of those details from the Williams Bay Zoning Ordinances. (I am not an attorney, so consider this a rough guideline subject to interpretation).

P&I Zoning allows for a maximum Building Coverage of 30%. This parcel is approximately 8.54 acres, which would allow for a maximum lot coverage of 111,600 square feet. That’s the equivalent of a building measuring roughly 370′ wide by 300′ deep. For comparison sake, assume the three new lakefront homes would measure between 5,000-10,000 square feet each. That residential end use would quite obviously be far more sensitive to the site than any institutional option, to say nothing of site aesthetics. The ordinance allows for tree cutting as needed for construction, which would mean hundreds of legacy trees will be clear cut for this new building. Remember, the building is allowable with approval under the current zoning, with no zoning change required. Oh, and the P&I allowable use would likely be run by a not-for-profit entity, so that lakefront would remain untaxed. What a great option!

On the lakefront itself, all this community needs to do is look to Conference Point Center to see what riparian uses are allowable and seemingly preferred in this zoning district. A few years ago Conference Point added a rental pier on the East side of campus. I’m not sure of the exact slip count on that pier, but I’m guessing it’s between 12-16 slips. The same group built a large housing dorm on the lakefront near that pier. Development is occurring, but because it’s buried under a P&I zoning the community doesn’t seem to care. Now, on the West side of the Conference Point campus, a new pier. This one also for slip rentals, and while I’m not sure of the exact number of slips on this brand new pier, let’s assume it’s similar to the other new-ish pier. This is an addition to a tremendous number of buoys and other piers already on the site. George Williams has been adding student housing and wedding venues and amphitheaters quite frequently, and yet this development and steady increase in density is also just fine with the village and permissible under the generous P&I Zoning.

The lakefront that the University of Chicago is seeking would have a maximum of 9 slips on three separate piers on that 550′ swath of lakefront. Compare that to the P&I examples above, or just to a similar lakefront stretch on Walworth Avenue in Williams Bay where 550′ would have 11 slips, at minimum. Want to preserve the Yerkes lakefront? Build three homes on it. Want to destroy it? Let a group take it over and exploit the loose P&I zoning that is already in place.

If you’d like to see more examples of the uneven hand of Williams Bay approvals, consider the four new mega-houses in Cedar Point Park. If you were in town four years ago, there would have been two smaller homes where you now see four monsters. These land divisions were approved by the Village of Williams Bay. These home sites are sloped (likely well beyond the 12% grades that the zoning considers to be “steep slopes”) and feature builds that occupy closer to 30% of the available land mass. If you don’t like the Cedar Point subdivision comparisons, consider just last week the Village approved a variance along Constance Boulevard to build a lakefront home with variances on the side yards so that the structure can be wider than the zoning ordinance would have otherwise allowed. The Yerke’s lakefront lots would require no such side yard variances, because the lots are massive and the density exceptionally low.

I write this as a kid from Williams Bay, not just as the broker involved in this process. When I first approached the University of Chicago I did so because I desperately wanted to preserve the Observatory. I wanted it to be there for my grandchildren. I wanted to see that dome from the lake as I have for every summer of my 42 years. But I understood that the University could only save the Observatory if they were able to monetize the remainder of the parcel. The plan for which they are seeking approval is the best possible outcome for the Village of Williams Bay and the lake community at large. The current zoning is far more dangerous moving forward. The apparent tone in the community is that the development should be denied because the property should remain untouched. Unfortunately, this is not the binary outcome. The choice is to preserve the lakefront through this sensitive large-lot residential rezone, or leave the parcel in its current P&I Zoning which allows this lakefront to be developed into the next George Williams or Conference Point Camp. If you’re happy that the University of Chicago chose to save Yerkes, and you want to see the lakefront beautified and preserved, contact the Village and voice your support for this sensible residential re-zone.