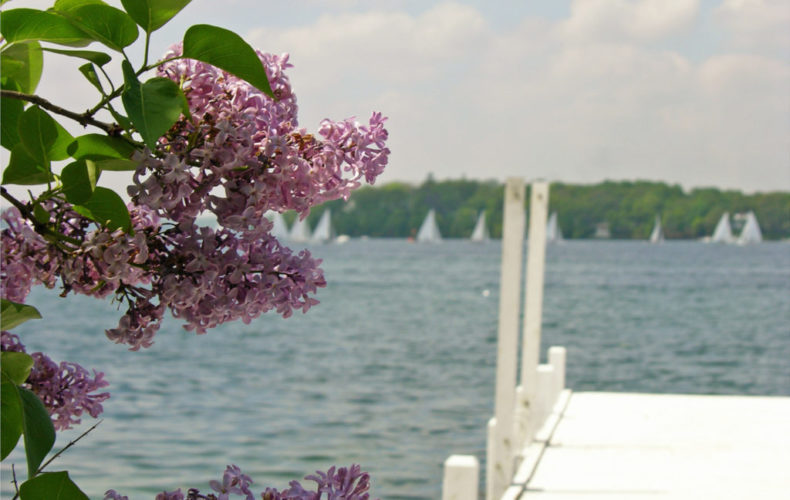 There was an old Lilac outside my childhood bedroom window. It wasn’t a great bush, or tree. Whichever it was, it wasn’t the finest specimen. It was just a bush around the corner from an old garage, wedged in between that old garage and older house, down around the cracked concrete driveway that later would be paved. When the pavers came they found an old brick cistern under the driveway that no one knew was there. Well, I suppose someone knew, but that someone was dead. He might have been the one who planted the lilac.

Down the road, around the corner, up a ways and over just a bit, there was another man. An older man, a shorter man. Just a man, really.  I met him on the pier, his fishing rods stuck into PVC holders that he affixed to the outside horses on that long association pier.  The lilacs were in bloom. His bucket was full of bloody water. Rock bass twitched their fins, bluegills rested, belly up, their eyes blank and wondering. Lower still a crappie, maybe two. Large and white with black dashes. Papermouths, the men called them. A smallmouth bass, wedged in the bottom of that bucket of death and dying, not longer than 12 inches.

It’s a rock bass, the old man told me, his tone proving his lie.  I knew better. I knew it was a smallmouth and I knew it wasn’t legal. I knew it was too small. It bothered me something terrible. Later, as the years wore on and both of us grew older, I’d sneak down in the morning and release the fish that the old man had caught and tethered to the pier with an old sailing rope. Other times there would be no fish to release, so I’d open his minnow bucket and let the minnows swim free. If he didn’t have any minnows then he couldn’t skewer them with a hook. If he couldn’t thread that hook through their eyes then he couldn’t cast that old frail monofilament out and set the worn rods into those homemade holders. If I could stop the first part of this cycle, the death could be spared.  My desired end more than justified those particular means.

He’d give me advice, once in a while. Sometimes, the water was too cold. It’s early yet, he’d say. The water needed to be 50 degrees, or maybe 55. His old thermometer would dangle from the swim ladder, close enough to where he’d store those fish that I’d later release. I wondered if he knew what I was doing. I assumed he didn’t, but now as I think about it he must have known. There was no one else but me.  Without the thermometer, he told me, it wasn’t hard to know when the bass would be biting. When the lilacs bloom, that’s when they’ll be biting.

There was another large lilac on my way to and from school, and in April and then May I’d walk by that bush with anxious anticipation.  That lilac, and the one by my window, took forever to bloom. Cold, late spring would cling for so long. Every day, nothing. Then, something. Tiny sprouts at first, but then within days, maybe just hours,  I’d witness the unfurling and pushing of all those leaves. Bright green, young green, then, when the blossoms were near, deep and lovely green. Every day, a little more. And then, like magic, the flowers. Those flowers with their purple petals and overwhelming perfume, they told me it was time. Time to grab by rod and reel and cast those chartreuse jigs as far as I could, sometimes towards shore and sometimes towards the depths. Smallmouth bass would eat, greedily, angrily, their red eyes filled with malice towards that little collection of feathers.

These days, I don’t fish in the lake very often. I want to, but I don’t. There are times when the pull is greater than others, like late into a summer evening when the southwest wind falls flat and I see the bass chasing minnows to the surface.  Or in the fall when the boating traffic has left and the lake is clear and the water cools. I know the big fish are in shallow. I know the lake trout and the brown trout are spawning, and I know the musky and the pike are binging before a long dark winter. But the strongest of pulls is right now. In the spring, when the grass is green and the lilacs are purple. I haven’t fished in the lake for a few years, but I know the bass are biting. The lilacs told me so.