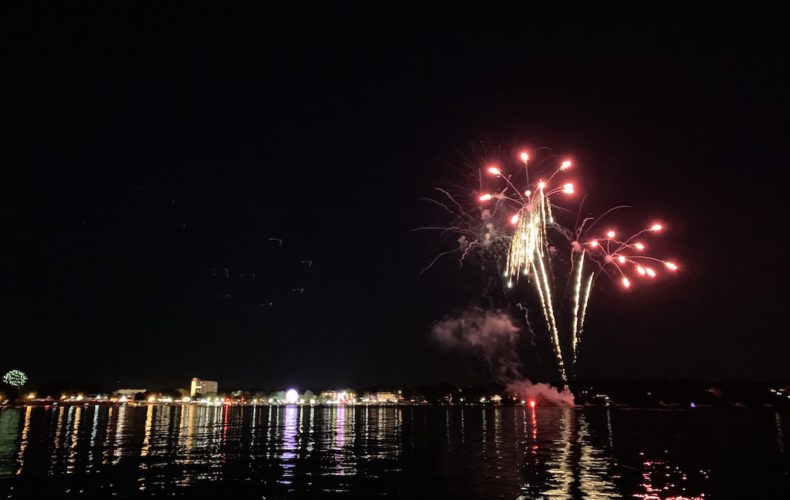 There are things here that we do exceptionally well. Things we do better than anyone, at any place, during any point in history. An evening boat cruise aboard a capable boat, the sun settling below that green western horizon, the calm rotation of a strong engine and the rolling push of white prop wash, it’s all about as ideal as it could be. The lake falling flat, the piers still, the lake nearly, entirely yours. This is what we do well here, among many other things. The evening cruise here is as good as it could be anywhere, and this is something we should be proud of.

But last night, with that lake doing what it does and the boats doing what they do, there was an interruption in the quality of the scene. The carnival that is Venetian Fest was winding down, but leading up to, really, the last important fireworks display of the summer. The fireworks, I should add, were quite good. Never mind that we should still abandon a relatively tedious 15 minute display and instead choose to have an invigorating 6 minute display, one where bystanders cannot help but turn to one another and question if something has gone wrong. We are not used to so many explosions in such a short period of time. The fireworks were fine, the long weekend of Venetian Fest was fine. The Wrigley’s bringing in One Republic to fist bump with Mr. Wrigley, also fine. The problem was was happened in between all of that.

The boat parade is, in theory, a fine idea. Some old boats, adorned with some lights. It’s fine by me. Cruise boats, filled with patrons, each paying the small ransom to spend an hour or two afloat, fine. My issue isn’t with the idea, it’s with the execution. The concept is acceptable, even perhaps fun, but the actual implementation of this boat parade leaves everything to be desired. I sat on a pier on the west side of Geneva Bay as dusk settled in, and the thumping from an over-cranked boat stereo signaled that the disastrous boat parade of 2019 was about to begin. I paid attention.

The first few boats, no big deal. Some haphazard lights strung in varying shapes on some of our nicer tour boats. One was some sort of blue cocktail. Another maybe a surfer. One a pig roasting over flames, done entirely in orange so it looked less like a summer light parade and more a Spirit Halloween window display. While the first few boats pushed from south to north, the music still bumped. Annoyingly loud, it pulsed from the ugliest boat to ever find its way into a boat parade outside the muddy shoreline of Lake Havasu.

Rather than having actual themed decorations, the Ugly Boat had the name of the boat rental company on the side of it. Why would this be? Can I place my boat into this “parade” and write Geneva Lakefront Realty on the side of it? Even if I could, should I? Within a few minutes, the boat parade was over, and the decibel levels returned to normal Sunday evening levels. Everyone was thankful the parade was over. Shortly after, the fireworks exploded and the display was energetic and all was fine. Another Sunday night at the lake, in the books. But all was not well.

The boat parade is silly. It’s obnoxious. I recognize that people worked hard to decorate the boats, but if I work hard to carve a maze into the giant ragweed that are overtaking my yard, does that make the maze a good idea? Let’s get back to acting like Lake Geneva, and kill the boat parade for 2020. If we’re trying to become the Wisconsin Dells, then by all means, let’s boat parade like crazy. But if we’re trying to be Lake Geneva, let’s act like it.