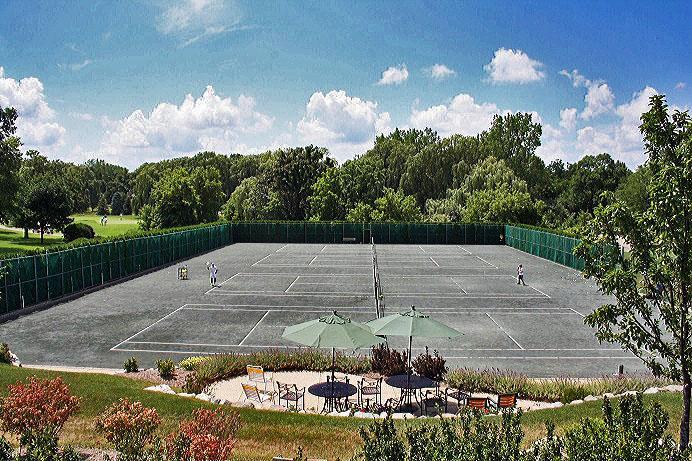 I owe Abbey Springs something. Not money, I don’t think. It’s never paid me very much, so I shouldn’t feel obligated to pay it back. In the mid 1990s, I was a kid with a new, disastrous real estate career, and a desire to play tennis. I don’t know why I wanted to play tennis. I had never played when I was a kid.  We’d sneak down to hit a few balls at Conference Point Camp, on their cracked and heaved courts, but that wasn’t really playing tennis.  I couldn’t afford the Grand Geneva, with their shiny courts and wood lockers. So I played at Abbey Springs, under the tent they’d blow up over their outdoor courts in the winter. It was cold in there, dimly lit, and loud.  The inability to properly relay the score, on account of the noisy blower fan, suited me just fine. Thanks, Abbey Springs.

But that’s the end of the thanking. Abbey Springs the real estate market is really quite a spectacle. It’s a machine, finely tuned, running without a miss, or a knock, or a sputter. The market is perhaps the most unique and widely varied here, with vacation condominiums starting in the high $100s and single family homes reaching or exceeding a million bucks. Remember that sentence.

For the year just ended, Abbey Springs closed 28 built properties including condominiums and single family homes. For all of 2016,  there were 40 prints. Now, if I were were a headline writer for AP,  I’d right this in a way that would appear negative: SALES DROP 30% AMID MARKET TURMOIL. But I’m not AP, I’m just a kid from Williams Bay, and even I know that shrinking sales totals are natural and normal in a market with shrinking inventory.  We cannot sell what isn’t for sale. The sales total for 2017 is fine, the inventory today, at just 19 active properties (four of those under contract) is low. The market at Abbey Springs is in fantastic, healthy condition.

But that’s not really the whole story here, as much as Abbey Springs wishes it were. Consider the upper bracket sales from last year. There were four sales over $800k in Abbey Springs, with the highest sale reaching $885k. That’s nice.  For the last five years, the two top sales in the market registered the same amount: $885k. Nothing higher, and over those five years just five sales over $800k. Seems fine, right?

There’s no particular mystery in this. The market is strong today, yes. But the top end has obviously been redefined, and that new definition falls short of $900k. There has been some inventory over $900k to press that theory, but those homes have failed to sell. The prior market peak found buyers in this range with relative ease. It’s apparent to me that this higher level buyer is still in the market, but has found his or her way outside of Abbey Springs and instead wants a traditional lake home experience. That buyer wants a slip. Maybe some privacy. A smaller association where the beach isn’t so crowded. The buyer who once purchased $950k homes in Abbey Springs has proven elusive in this current cycle.

But maybe that doesn’t really matter. Abbey Springs might not be a million dollar market anymore. Or perhaps there just haven’t been any million dollar homes listed for sale.  Either way, expect Abbey Springs to push forward yet again in 2018, and expect inventory to stay low. If you’re a buyer in search of a lake house experience with added country club style amenities, Abbey Springs is likely your best bet.  Condominiums from the $200k range and single family from $500k. Beach, pool, golf, clubhouse, and tennis courts, though the bubble is no more.