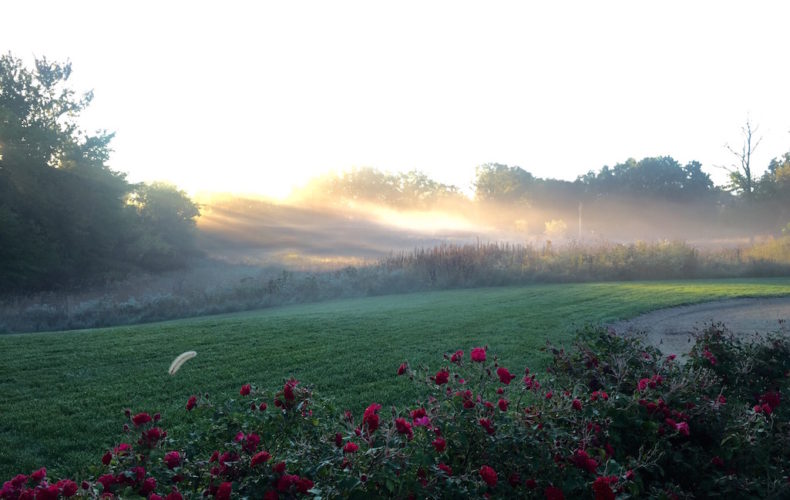 The Saab 900 was gunmetal gray. The roads were straight, the path clear. North. That’s all I needed to do, bearing East when possible, but mostly just North. The Saab had a top speed that I never discovered. The rattle and wobble at 70 made sure that the higher numbers on the speedometer wouldn’t be touched. The roads were gray, the sky gray, the trees browned and grayed, the clouds gray. The lights dim, everywhere dim. The lake, that big lake to the East was gray, the water and the shore and the clouds and the space between, gray. It was late fall, I was 18 and I drove into the night.

On a typical trip to some other place, the route is dark and confusing and the turns many  but the destination, once it comes into view, is clear and bright, welcoming a weary traveler to the place where he intended to be. The traveler finds his destination and the troubles of the trip are forgotten, the wrong turns now merely a laughable memory because the journey is complete and the place he finds himself is perfect.  Instead, I drove the tired hatchback down slippery roads, soaked with rain and trampled leaves that had been ground into a paste on these county roads. I drove not knowing where I was going, not knowing what I was searching for.  The Pinkerton album my misfitted soundtrack.

A Vacancy sign was all I needed to see, and after some time I had been seeing nothing but. Vacancy, they’d all say, the NO distinctly quiet and dark, like the woods on these roads and the rain that fell and the paste that clung to my balding tires. The I didn’t want to commit to any particular lodging option until I had driven past many of them, each one darker and dimmer and more unwelcoming than the last. After some time of this I decided that one was as good as another, and I pulled in to a small cabin that looked like a house, with a car out front and a lamp lighting the window. The pull chain light flashed Vacancy.

The older woman was kind enough, and I exchanged some money for a key and a map to the cabin that would be home for as long as I decided it should be. If it was dark on the road, and dark in front of the cabin office, then it was positively pitch but the time I found my way down the leaf soaked path to the cabin. I don’t remember if the cabin had a name, like the  Chipmunk House, or if it just had a number, like Cabin 3, or a letter, like B. I found the cabin and went inside, the rain intensifying, the darkness finding its way darker still.

It wasn’t scary in the cabin, but it wasn’t not scary, either.  It smelled like wet dust, like any cabin would smell after the first rain of spring, after a long time of sitting empty over a long, cold winter. But this was fall, not winter, and so it smelled anyway and I left my bag on the bed and drove towards town to find something to eat. The town greeted me in the same manner as the county did, in the same way as the cabin office did, in the same way that the cabin did. It was dark in town,  a few cars offering the only movement, the only thing open a small gas station with two pumps, pay inside, cash only. I bought a cardboard wrapped pizza, first estimating its size to determine if it would fit inside the narrow oven at the cabin. A two liter of pop rounded out the order. The man at the register looked at me like any man at any register has ever looked at a single traveler who appears lost and confused, whose clothes and hair were soaked from the dark rain, who looked as though he didn’t belong there.

I couldn’t just drive back to the cabin at this point, because the TV was small and the pizza would only offer a few minutes of distraction, and so I drove down to the shore to look at the water. That’s why I was there, after all, to fish for the salmon that should have been running in such great numbers that even me, a kid from another place who drove there only on a whim, with some cash and a new CD and a wobbly gunmetal gray car. I pulled up to the harbor, to look out between the swipes of the wipers, to see the water whipped and the waves crashing. There were no fishermen there. Just me, in my car with my pizza and a fishing pole. I wasn’t sure what I had expected, but this wasn’t it. This looked intimidating, unappealing, difficult. I ate the pizza on my bed and tried to ignore the wind that felt like it might knock the cabin down and bury me in a pile of dusty rubble in a county where I shouldn’t have been.

The next day, the water was high, the sky gray, the town as empty as it was the night before. I kicked some leaves down the sidewalk in town, looking like a lost tourist who showed up the day after everyone else left. The restaurants had signs, THANKS FOR ANOTHER GREAT YEAR, even though I knew they didn’t mean it.  If the year was so great there would have been some money left over to fix the awning that was tearing at both ends, mildewing so heavily that I wasn’t sure what color, exactly, the fabric was supposed to be. The river that I wanted to fish was wide and muddy. Even if there had been fish in it I wouldn’t have been able to catch them, and since I didn’t see them it didn’t make any sense to me to fish for something I wasn’t sure existed. I had missed the run and I had missed their fall, I figured, and that’s why no one was here. I shuffled through town for the remainder of that day and drove home before the night fell.  It was October and I had missed what I had driven so far to find.

Today, it’s bright and the leaves are green, except the few that are yellowing and the others that are turning to red. Mostly, it’s still summer here, even though the temperature disagrees. It’s early enough that you still have time. You won’t miss fall here if you visit this month, but if you show up later in the month I assure you the lights will still be on. We’ll still be here, because it’s Lake Geneva and we don’t look at October as the end of anything. It’s just the start of another season, and like all of the other seasons, it’s one that should find you here.