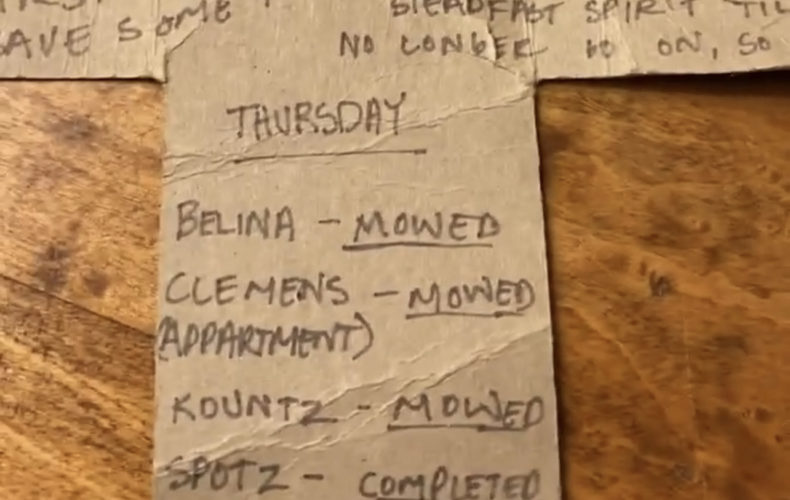 I have a friend named Eric that you probably don’t know. I met Eric when we were both in the sixth grade attending a small church in Williams Bay. We were friendly without being friends, sharing a mutual burden that was being stuck in that basement church on so many Sunday mornings…mornings that often crept into the early afternoons. Eric went to Faith Christian that year, and I went to Williams Bay Public School. We were alike but different, only friends in that one setting.

The next year I went to Faith Christian, and Eric was my obvious lifeline at this new school. We became real friends that year, playing sports together and enduring those basement Sunday mornings just as we had before. Eric would come over to swim from my parents’ pier, doing the best gainers off of the neighboring diving board. He had curly hair that flopped over his forehead and olive skin that tanned so much better than mine. We went to school together and Awana together where we indulged in our favorite pastime of making fun of the kids we didn’t know.

In the summer we played basketball in my parents driveway, and on warm days towards the end of winter we’d chip out the ice under the hoop and spread table salt so we could play some more. We fished together in northern Minnesota on our shared summer vacations and once we rode our bikes around the entire lake, or we rode them at least until my tire popped and I had to walk my bike back. We played ice hockey in the winter and we watched fishing shows on Saturday afternoons in my living room. Channel 32 or 38, which one I cannot remember, but they were both fuzzy and the weather dictated if the shows would be viewable or not. We rode his dangerous dirt bike through his makeshift backyard track and marveled at his dad’s cell phone, complete with large carrying case, shoulder straps, and a multitude of wires.

Eric started to work for me during our freshman year, but even though our shirts said Curry Enterprises and I was the “boss” and he was my “employee”, we mowed lawns together because we were friends. We ate endless bags of Gardetto’s and drank gallons of Sprite and once we both watched in shame while one of our lawn mowing customers violently swept his foot against the grain of the grass while franticly accusing us of doing a terrible job mowing his lawn. The customer was right, we were doing a bad job. But in our defense, that old Gravely 50 made it very difficult to sharpen the blades.

One summer I went to Strawberry Lake with my family and Eric stayed home to mow. He filled out his time card on the front and back of an old scrap of cardboard, illustrating his day and recounting his victories over the various lawns. It reads like a cartoon complete with inside jokes, pop culture references, and sketches of his activity. Today there is not one thing in my house that dates to 1994 except that piece of cardboard that Eric drew and wrote on. I have it on a shelf and I’ve never lost track of it through a dozen moves. Because it has always mattered to me.

In the spring of our Sophomore year, I turned 16 and passed my driver’s test. I had an old Dodge pick up truck that I had bought the fall prior, and the countdown to passing that test and driving in my white chariot had finally expired. The first thing I did upon arriving home with my license was drive that truck to Eric’s house to pick him up. We drove and we drove and we had freedom of such flavorful variety that admittedly I’ve never felt since that day. The following winter Eric and I were driving east on Highway 50 during a snow day when the truck spun out and ended up in the ditch. Uninjured, we laughed at our luck before a good samaritan stopped to pull us back to the road.

We played Soul Asylum and Smashing Pumpkins in his upstairs bedroom on the powerful speakers his dad bought. We watched the movies of the day, like Encino Man and Hot Shots, the latter from the uncomfortable front row in the old Lake Geneva theatre. We went on Canadian Adventure Camp with our friend Jon, riding in that bus through the entirety of Michigan until they dropped us by some rainy day path that we hiked until we caught the train to camp where we met girls and steered our shaky canoes through the tannic waters of southern Ontario. A group of modern day Nick Adams’s, we supposed.

Sometime during the fall of our Junior year, Eric’s parents sent him to the Williams Bay Public School, and our Faith days were abruptly and cruelly over. Eric quickly settled in with a new group of friends and our friendship fizzled. I cannot remember why it fizzled so quickly, but it did. Had text messaging existed I insist we would have stayed friends, but I remember distinctly thinking that he was on to better things with his fancy new friends and I didn’t dare invite the embarrassment of leaving an unreturned voice message on his home answering machine.

The next twenty-five years would pass in a blink and Eric and I were nothing but old friends who lived as strangers in the same town. We’d exchange a wave now and then, but I do not believe we spoke from 1996 to 2021. In the spring of this past year I heard from another friend that Eric was sick. He was given a terminal diagnosis with a few weeks to live. Over the past year, I’ve done what I can to make sure he knows that he matters to me. His life matters. His memories matter. His wife and his son matter. Our history matters. Those days on the hockey rink and in the front seat of my truck and on the icy driveways where we dunked tennis balls, all matter.

Today, my friend Eric is still battling, courageously, valiantly, bravely, battling. He’s doing what he can but this damned cancer is facing him at every turn. I’ve had relatives die. My own brother died when I was too young to know it. Old classmates have died. Clients have died. Family members of friends have died. I’ve mourned them all. But my friend Eric means more to me than all of the rest of them, because my adolescent memories are bound with his. We came of age together in this town, and where we ended up can’t matter as much as where we started. In our cynical culture many deride the concept of thoughts and prayers, but I have nothing else to offer him. Miracles can and do happen, and if there’s one available for today, I’m begging for it to be given to my oldest friend.

An update on this: My friend Eric died in the early morning hours of April 3rd. I visited him two days earlier, but I was unwilling or unable to wake him from his sleep and left without admitting what I knew would happen next.