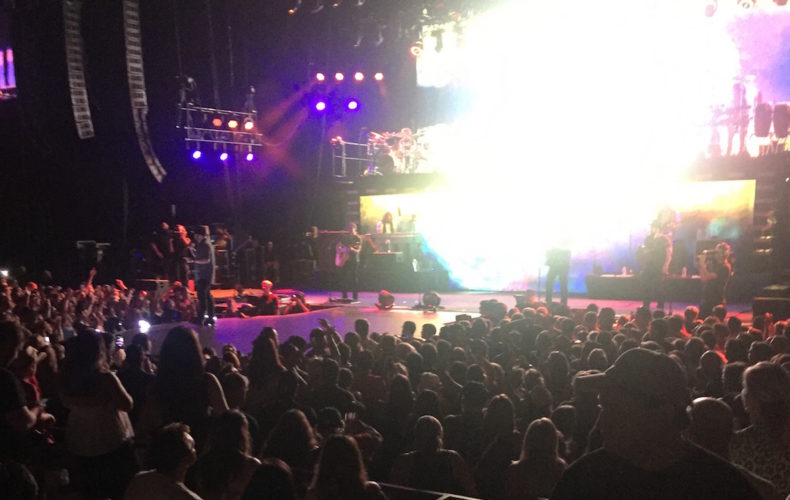 Last month, I went with my wife and two friends to see Zac Brown. The act is called The Zac Brown Band, but that would have been similar to Elvis Presley calling his act The Elvis Presley Band. We know it’s just about the star, sorry Commodores. We went to see the show at Alpine Valley on an intolerably hot evening, the sort of sultry evening we’ve grown accustomed to during this hot and sunny summer. I was not initially interested in going to this concert, and only brought it up in conversation as a way to brag about the incredible hotel demand during summer months around Lake Geneva.  But go I did, and on that evening when we filed into our seats at Alpine I wasn’t quite sure what to expect. Having lived all 38 of my years within 5 miles of Williams Bay I had never been to Alpine for a concert, ever.

When the show began it was obvious this was to be like few other shows. The sound was perfect. The stage close, the singer in tune and his band on point. The venue was beautiful, the evening sky casting pastels, the crowd up beat but not too boisterous.  When the show was over there was order as thousands of revelers made their way through the constricted thoroughfares and into their cars. The exit line was smooth, well orchestrated, and within 30 minutes of the last note dying out we had dropped our friends off at their lake house and headed home. It was an accidental concert for me, but one that I thoroughly and utterly enjoyed. Alpine Valley was all class, and as someone who prides himself of not being impressed by much, I was impressed. Alpine Valley the music venue had won a supporter for life.

Last night, on an evening that managed to be hotter and more humid than the Zac Brown evening in June, my wife and I picked up two friends and drove to another concert. Instead of turning north towards East Troy, we turned south towards Twin Lakes.  Eric Church was playing at Country Thunder, and we had tickets.  Just as I had never been to a concert at Alpine Valley, I had never attended Country Thunder. I had long heard of it, and marveled at the caliber of acts that the venue was able to attract, but I had never even considered going. Last night, as the sun faded and the lightening lit up the southern sky, we drove into the parking lot and nothing seemed amiss. The parking was orderly, and we were able to walk in a path that dodged the muddy ruts that were left after the Saturday rain.

Upon entering, it was obvious that at age 38 I was nearly the oldest person there. Sure, there were some other old people like me, but for ever person over the age of 35 there were 500 people under the age of 25. This was a scene that I had only seen in movies, and as I waded through it to buy some waters, I was pleased to find that I was the only person in the water line. The first encounter with spontaneous puking would not occur until later, as we stood nearish the stage and waited for Eric Church to play.

I was wearing shorts and a shirt. This shouldn’t be a big detail to mention, but I was one of few wearing a shirt. My wife wore a shirt and shorts, which made her one of the few women to be wearing a shirt. We were shirted adults in a sea of shirtless youth. When Eric Church strummed his first chord, it was exciting, but not really. The sound was terrible, not loud enough for a concert, not clear enough to hear the skill.  The mass of humanity that gyrated and vomited around us didn’t seem to notice that the songs had started, and they carried on whooping and hollering and vomiting and dancing and trying, desperately, to remain upright. Some people sat on the ground, the ground that on day four of this concert had been defiled by all sorts of horrible things. Girls sat in it as though they had no choice.

After some time, the show ended. We sat in the car for nearly an hour as the parking lot slowly shuffled towards the exit. I valiantly fought off a panic attack, as traffic is far from being my thing.  My three hundred dollars would have been better spent if I bought lottery tickets with the money, but we decided that at the end of the night there was some value in this evening. I will, from this time forward and for the remainder of my life, never go to Country Thunder again. Further, and more importantly, my children, and their children, will never go to Country Thunder as long as they live. Am I a square? Absolutely.  Do I ever want to stand next to someone while they spontaneously vomit? Don’t be silly.