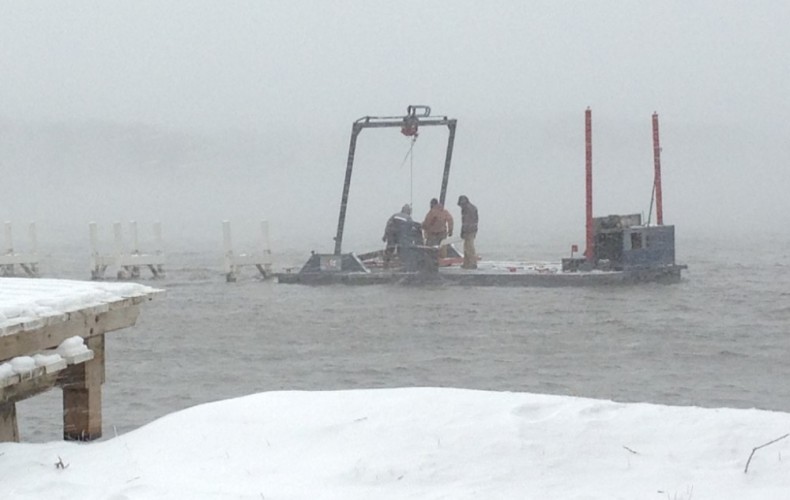 It’s that time of year again. The time of year when the piers are unceremoniously disassembled and stacked along our shorelines. That happened in October, sure, but this morning there are still piers in the water, plenty of them. Covered in snow, surrounded by 38 degree water, still there.  Soon enough, they’ll all be out, all stacked in some haphazard pile, lined up along the shore to remind us why we wait.  There’s more to this time of year than just waiting, mind you. It’s not just the Holiday season, it’s more than that. It’s the time of year when buyers buy houses with bad boat slips.

Is there such a thing? You bet there is. A boat slip is not a boat slip, is not a boat slip. These things appear the same, especially when the components that make up the slip are stacked in a snowy pile along the shore. But they are not the same.  If you’re new to the market, or perhaps working with an agent who might be new to the market, you wouldn’t necessarily know the difference. After all, the MLS distinction for “boat slip” doesn’t specify what sort of slip you’re buying. You want to see homes with boat slips, you look at homes with boat slips, you buy a home with a boat slip. Cool, right?

That depends. A boat slip diagram on a listing sheet might look simple enough. There’s a pier, some slips, a line to depict the shore.  Everything is awesome. Except that you, the winter buyer, can’t quite tell how much water is in that shoreward slip. Is it enough?  Well, that depends on what you’re looking to put there. Is there enough water for your 25′ Cobalt that you desperately want to gift yourself for Christmas, under the guise of it being a present for the entire family? Or is there enough for a 16′ Lund? Maybe a waverunner or two, or a scow, so long as the center board is out? Boat slips can be deceiving.

There are homes in this market that fail to sell simply because of their assigned slips. There are homes with terrific slips that have been bought by neighboring owners only to have the slip switched with their poor slip. That just-bought home goes back on the market sometime later, but instead of being sold with its terrific slip, it now has the miserable, shallow slip.  Later, you peruse the online listings… Oh look, a home with a boat slip!

There are associations with assigned  boat slips. There are associations with boat slips that can only be attained after decades on a waiting list. Other associations have other rules.  The off-water market functions largely on the availability of a slip.  What’s a slip worth these days? Call it $200k and you’ll be safe. Sometimes a slip ads even more value, and sometimes it’s less. Sometimes a slip is good and sometimes it’s bad. Sometimes it looks good but it’s still bad.  Whatever the association, wherever the slip, winter buyers should beware. ‘Tis the season where the bad slips are nearly indistinguishable from the good ones.

If you’d like to know the difference, it’s actually rather easy. Just ask me, and I’ll tell you.