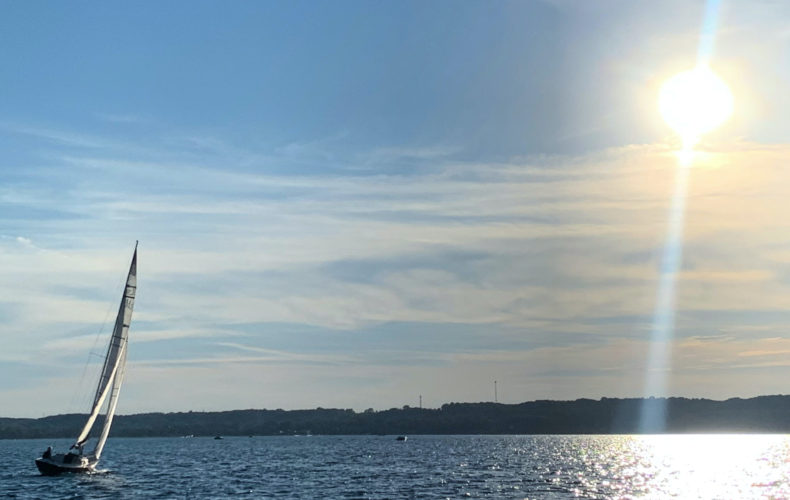 The license plate said that. ENDLESS SUMMER. If you capitalize it, then it seems like some sort of horror film. It screams at you and demands things of you. But this wasn’t in capital letters. It was in soft letters, subdued letters. Comic Sans letters. There was an image behind the random numbers and letters that some inmate carefully stamped, and it was an image of a dolphin. I think it was jumping through a sun as it was setting, the round glow hollowed out to make a ring of fire that the dolphin jumped through. The image was meant to suggest a frolicking paradise. I saw the malicious intent in those dolphin’s eyes and I saw that gentle sun as a fiery portal to hell. Endless Summer, as if.

My daughter would suggest that an endless summer would be a good thing. She’s fourteen, and fourteen year old girls can be like that. She wants to be tan and blonde and meet her friends at the lake. She would like to do this every day of the year, because she’s fourteen. When someone grows up, they’re supposed to cast off the childish things, which are things like year around tans and endless summers and infatuations with jumping dolphins. Yet, here we are, a collection of adults, and a state to our extreme southeast has put this on their license plate. Wish to exist in a fairytale where every day is some tedious, but sunny, utopia? Move here, the license plate suggests.

It’s the end of August and the lake is returning to some calmer level of pre-Covid normalcy. Oh, we still have Covid, of course, because we’ll apparently always have it. If only we starve ourselves to death inside our homes, then it’ll go away, maybe. But here it is, it’s here and the lake knows it but the summer rush of June and July has given way to the typical calm of late August. I much prefer these softer days, when the obnoxious bright greens of June and early July fade into these duller tones. They’re easier on these aging eyes of mine, and I find that the summer I wish for and the summer I love is not the young summer of my youth, but rather the later, slower summer I see today. If I could stretch one season it would be this specific season, this late summer not yet turned autumn. This is the season I enjoy the most.

But that aggressive dolphin and that flame charred hoop, suggesting that someone of sound mind could wish for even this to never end. Who could think such a thing? Who could find an eternal, endless summer to be a proper way to live? I couldn’t live without the late August days and the jumble of summer weeks still remaining. I do not wish to lock in July and dwell in it for eternity. I wish for early summer in June, and mid summer in July, and late summer now. I wish for the summer that turns to fall, at first almost unrecognizably so, but then in a tremendous and unstoppable hurry. I wish to see the fields of beans turn from green to gold, but not at once, instead in a slow leaf by leaf progression until the nighttime temperature insists on gilding even the most youthful greens. I cannot wait for that to happen, because it’s late August and my internal clock tells me that it’s about that time. Rather than dread it, I embrace it, because only my deceased grandma and fourteen year old girls want to spend their lives trapped in the sweaty hell that would be an eternal summer.