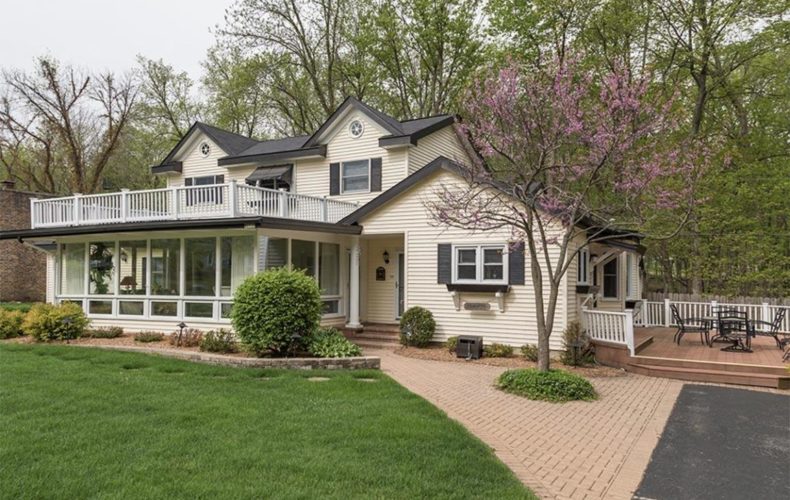 I brought a new property to market a week or so ago, and if you’re looking for a vacation home with transferable boat slip, then you’re in luck. As you hopefully know, certain price ranges come with certain expectations. For instance, a lakefront home priced at $1.4MM doesn’t need to have a garage to be desirable, but a lakefront home priced at $4MM probably should have one. In the same way, a lake access home with a slip priced in the $600s will generally be marked by what it doesn’t have, as much as by what it does have. These homes are often known by their tight yards, lack of garages, lack of remarkable proximity to the water, and overall condition. In short, they’re usually small cottages that leave all but the most motivated buyers unenthusiastic.

N1525 Oak Shores is in, you’ve already guessed it, Oak Shores. This is the boulevard association along that South Shore stretch that also features The Lake Geneva Club, Shore Haven, and Sybil Lane. This Oak Shores home not only has a transferable slip, but it has a large lot with spacious, level front lawn. It has loads of parking via two driveways and an attached garage. And inside the home, it has something else that most of these association homes won’t have: space. This is a four bedroom, three bath home with more than 2700 square feet of above-grade living space. It might need a bit of cosmetic updating, but this is a property you should consider. $649k and it’s yours.

Around the lake, activity abounds. I have a new contract on my Bay Colony condominium listing, you know, the one that everyone knows is likely the nicest standard condo on the lake ($799k). I have a new contract on the $495k condo offering in the Old Boatyard Condominiums, a small association that you likely only know about if you’ve lived there or also lived there. Other lake access activity is through the roof, as buyers are showing a particular fondness for wildly overpaying for off-water homes without slips…

Speaking of overpaying, there’s an interesting angle in the market this year that warrants discussion. The market is, without any doubt, hot. It’s hotter than it was in 2018. And 2018 was hotter than 2017. You could play that game going back all of the way to 2013, in case you’re bored. Because the market is so active, buyers are doing lots of really dumb things. They’re proving that they value immediate fulfillment above lasting value, and they’re once again back to buying homes For Sale By Owner because they think they’re somehow getting a deal by avoiding a dreaded real estate agent. I’ve heard of several off-market FSBO deals this winter and spring, and every deal I’ve heard about has sold for far over the actual market value. This is tremendous for the sellers, but incredibly terrible for the buyers. Do you, a random buyer, think you know this market better than me? If you answered yes, I implore you to buy a For Sale By Owner. You’ll do great! If you’re a buyer who is also smart enough to know that the answer is a resounding No, then why aren’t we working together? Beware the For Sale By Owner. It’s often listed that way because the agents told the owner that the property was worth $X, but the seller wants it to be worth $X + 20%. And you’re going to be the buyer who waltzes up and pays that premium, all because you think you know the market? For deep and lasting shame.

For now, it’s raining at the lake, and I have an office fire burning. But the snow has melted and the rain is warming the soil and soon it’ll be morel season. After that comes lilac season and after that comes Memorial Day. It might be miserable now, but blink a few times and it’ll be summer. As we prepare for that glorious condition, don’t forget that your choice in agent representation matters. Don’t forget that a For Sale By Owner isn’t automatically a deal. Don’t forget that this market has only one top agent (as considered by total individual agent sales from 2010-present, highest average sales price 2010-present). And don’t forget his name is still David Curry.