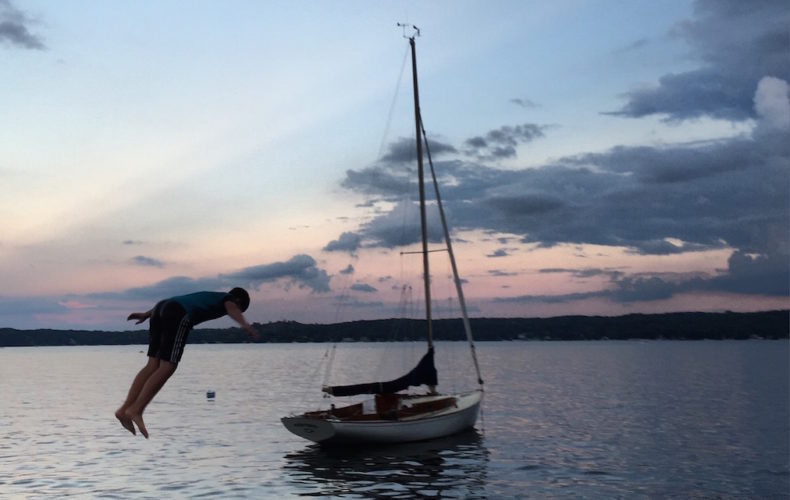 Well, I have it. The malaise. But this case is so severe it should be capitalized, like Malaise. I should add something more to it. Like The Malaise. You wouldn’t say there’s a plague sweeping across Europe, you’d say The Plague is sweeping across Europe, and the death toll is astounding. Bring out your dead, they’d call. And we’d wheelbarrow the dead to the curb and when someone asked what happened they’d already know. It was The Plague. This is how I feel today.

It didn’t have to be this way. In fact, I’m generally resistant to this strain of weather borne illness. When someone complains about the cold in January, I tell them it’s fine. Make a fire, I say. When someone complains about the rain in April, I tell them don’t worry. The flowers will come, and I have houses that need to be photographed for my May magazine and I need the rain, I explain. In October, when the rain comes and strips the leaves from the trees and everyone moans and cries, I know it doesn’t matter because the salmon won’t run unless it rains, so rain away. And in December when it’s almost Christmas and it hasn’t snowed yet I think it’s terrible but I can also go out and chop some firewood without getting my feet wet, so that’s nice. See, this is my generally pleasant weather disposition.

But that was before The Malaise. Part of this condition is owed to my firm belief in a very negative weather related thing. My belief supposes that if a rainy, cold, windy spring has not been shed by June 15th, then the entire summer will be awful. I don’t like having this belief, but it has been true most of my adult life, and I have no reason to doubt it now. Rainy and cold with wind in late May isn’t a big deal for me. It’s just spring, I say. But now, when I’m staring down June 15th on my calendar and I’m seeing the clouds of today and feeling the chill of late Autumn in the air I’m falling deeper and deeper into my despair. Will this summer be a bad summer? I suppose we have through tomorrow to find out.

There is but one way around The Malaise, just one vaccine, one antidote, one homeopathic cure. The Malaise will grab you. It’ll shake you. It’ll make you wonder what your life has become and where your life is headed. If you’re not strong enough to fight it, it can, and will, ruin your summer. The only way to stave off the terminal outcome of this condition is to fight it in moments. To disregard the forecast. To ignore the men and women who tell you to grab your umbrella, and cancel your afternoon BBQ. You must ignore the macro and focus on the micro. If a weekend is going to be bad, is it all bad? Is the entire weekend bad just because Saturday was awful? Is this Friday going to be wasted just because it’s supposed to be windy and the clouds are hanging low and my furnace kicked on overnight? Or will there be something redeemable today? Something worth our while. Something in the sky, some blue, some white, puffy clouds that will replace this heavy gray paint that now obscures the sun? If the day is lost because the forecast says so, is it really lost?

I read a quote this morning of unknown origin. As I was deep within the grasp of The Malaise, the quote felt timely.

The perfect future never arrives. Life is full of seemingly endless trouble, and then life ends. Find peace in the imperfect present.

Never mind the fact that I believe Jackson Bowne said it better:

No matter where I am, I can’t help thinking I’m just a day away from where I want to be.

The concept is the same. Enjoy the day. The weather might be terrible. It might be lame. But the day will wear away no matter the color of the sky, so just try to enjoy it. If we’re lucky, the sun might come out and The Malaise might blow over to Michigan, where it belongs.