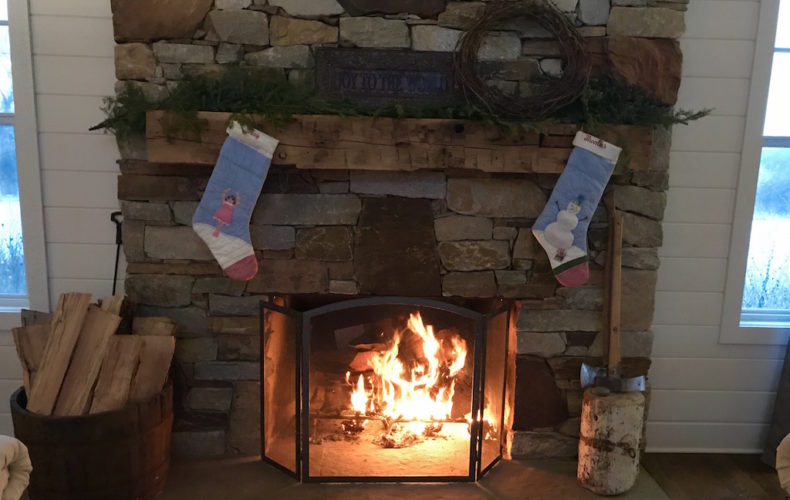 The living room was too hot.  The outside temperature barely registered 19 degrees, and the windows were open with the thermostat set at 68, but the living room was hot. Too hot, really. Sweaters made their wearers into them. Blankets, arranged to encourage a winter time wrap, were thrown far from sight. Who could need a blanket on a night so cold, in a room so hot? The fire blazed. Faint hints of woodsmoke flavored the air. The hearth was warm, no, the hearth was hot. Those stones, so many of them, cut from some other state and hauled here, stacked into place by a skilled mason. Each one radiating heat out and up.  The reflection of flames dancing on the thin windows that separated so much heat from so much cold.

Such a scene, such a night, could not be possible under the faked glow of a gas fireplace. A gas log set, the preferred source of sterilized winter fire, is indeed a fire. It’s a fire in the way that a pool is a lake. In the way that a football game played in a dome on top of plastic grass with rubber dirt is still a football game.  The gas log set was patented in 1911 in the state of New Jersey. New Jersey! That it to say that before 1911, from the year when it all started until that year in the last century, no such log existed. A fire was made of wood, or coal, burned for the heat but also for the ambiance. Ambiance from a gas log set?  If you paint a window in your daughter’s bedroom with a view of the mountains beyond, the sun just about to set and a few deer in the meadow, are you really in the mountains?

It’s no wonder people in the Midwest bemoan the winter. How could you enjoy winter with the faint flicker of a fake fire? How can you chase away a heat with flame that burns so cold? You have a blower on your fireplace? I have a rubber duck that I throw into my pool, but this doesn’t mean there’s a duck on the lake, anymore than your blower means your fire is real. A fire that doesn’t consume anything isn’t really a fire. Yes, it’ll burn. Yes, those synthetic logs you think look real will, indeed, heat up. But that doesn’t mean your room will glow and it doesn’t mean your guests will feel the heat of a live fire, lapping over the room and chasing winter away.  Take back your fireplace. Throw the gas log set in the garbage. Order some oak. Split it if you must.  Stack it. Load it into the fireplace. Crumple up yesterday’s newspaper and arrange the kindling. Light it. Bask in the glow and wonder about those poor gas log owners who think winter is somehow so difficult.